See how easy it is to set up TESMAT

Reasons to camp in your Tesla: Even before owning my Model 3 the stories of people Tesla camping in their Model S sedans made complete sense. It’s the ultimate HVAC tent.

As luck would have it I came across the Tesmat the night the inventor announced its debut. After watching the videos and visiting the website I was sold. The Tesmat is an ingenious blending of form and function.

The killer feature is how small the mattress becomes when compressed into its 22'' x 14'' x 10'' soft case. The three pieces that form the area where your head rests have wood pieces at the bottom of the foam. They serve two purposes: extend the useable space over the well between the front and back seat and make it easy to compress the foam pieces straight down into the carrying case.

The mattress pieces are held down in the carrying case by a strap with a clever magnetic closure. The materials all feel first rate.

The ability to set up (and put away) the Tesmat in a matter of minutes, coupled with its small footprint, opens a new world of long-distance travel in a Tesla.

If camping in a Tesla Model 3 is your thing, the Tesmat is an absolute steal. After using the Tesmat 3 or 4 times and skipping a hotel you’ve already paid for it. A true no-brainer purchase if you’re a Telsa camper. 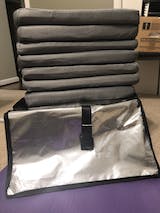 The tesmat is my favorite accessory for my model 3 that I've purchased. I'm extremely impressed with the quality and how comfortable it is. For the price and how easily it sets up and packs away, every model 3 owner should have one of these. I used it to nap in my car during my lunch break today and it was a total game changer. I wish it included a pillow though

arrived today in germany, just 3 day before a 600mi road trip to spain. cannot wait to test it with my wife. in winter conditions it takes some time for the volume to fully unfold, but then it is better than sleeping in a tent! what a great idea!!! reinvests itself after 3 hotel nights saved....

Wow, glad it arrived in time for your road trip! If you are in cold climates, crank up the heat in your Tesla for about 10 minutes to speed up the expansion of the memory foam. Sounds like an amazing trip. Enjoy!
c
c.
Great Support

Because of Corona, I couldn´t test the equipment really well yet, but the support of George is amazing and great in any aspect !!!

I received the product today after pre-ordering it a few months ago. I just want to say thank you to the Creator and the alternative for this would be the DreamCase which is, in my opinion, unreasonably priced. The setup was easy. I didn't test the fit in the car, however, it looked like it would fit inside the Model 3 snugglly. Can't wait to use it for our road trip!! 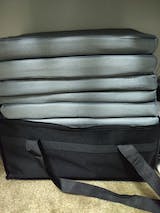 Thanks for the 5 star review! Hope you enjoy your first road trip with your TESMAT as much as I did!
123